After months of intensive negotiations, APS Bank and the Malta Union of Bank Employees (MUBE) reached final agreement on the new Collective Agreement.  This covers a term of three years (2014 – 2016) and was signed on 11th April 2014.

Mr E. Cachia – APS Bank CEO – thanked Mr W. Portelli – President MUBE – and both negotiating teams for their ongoing collaboration and the goodwill shown all through the negotiations.

Mr Portelli noted that this was the ninth agreement successfully concluded with the Bank and congratulated the Bank on its strong work ethic and performance throughout the past years.

The new agreement includes a number of improvements and benefits for APS staff members, such as salary increases throughout its term, the continuation of the Bank’s profit sharing scheme, enhanced family friendly and wellbeing measures.

These improvements will continue to ensure a positive working environment, staff motivation and development in concert with sustainable growth within an increasingly challenging and competitive environment. 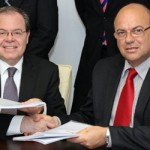 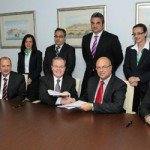