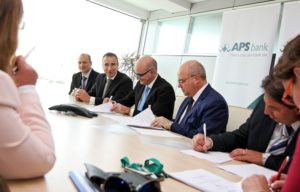 After extensive and cordial negotiations, APS Bank and the Malta Union of Bank Employees (MUBE) have concluded a new Collective Agreement for the period 2017 – 2019.

APS Bank CEO Marcel Cassar thanked MUBE and both negotiating teams for the collaboration and goodwill shown throughout the months of negotiations. The new agreement includes a number of improvements and benefits for APS Bank staff members, including salary increases, enhancements to the profit sharing and home loan schemes as well as family friendly and wellbeing measures. An important new measure will see the evolution of the traditional ‘grade’ structure to a more modern ‘position-based’ system following a thorough Job Evaluation exercise which the Bank has embarked on.

Speaking at the formal signing ceremony held on Friday, 28 April, 2017 at the APS Bank Head Office in Swatar, Mr Cassar said that the new Agreement marks a progressive step forward which seeks to align the Bank’s ambitions for growth with the need to attract and retain the best talent. “By offering the best employment conditions, we are investing in, and rewarding, our most valuable resource”, he added.

Mr Portelli noted that this was the seventh agreement MUBE successfully concluded with the Bank and congratulated it on its strong work ethic and performance throughout the past years. Mr Portelli said “this Agreement is a clear application of APS Bank’s value of employee development as the Bank reaffirms its status as an employer of choice. Negotiations were cordial, conducted professionally and smoothly whilst both APS Bank and MUBE have committed themselves to continue building on what has already been achieved to the benefit of all stakeholders concerned”.